Thus whilst we do not physically kill you, we slay your character, your reputation, your self-worth, your sense of existence, your connection to us and still continue to draw fuel from you, something we could not do if you were physically dead.

It goes unrecognized but it exists.

It exists on an extremely covert level.

It happens behind the scenes without anyone even being aware of what the problem is; the real problem.

No evidence of it is left behind and no-one has ever been convicted of it yet in reality, what I will term pernicious abuse is something which can and does have a devastating effect, not just on the victim, but also within society. Pernicious abuse can lead a person into carrying out acts such as covert psychological murder, or perhaps even covert psychological manslaughter – something which is very real, insidious in nature but unfortunately unrecognized and virtually unquestioned.

Psychological murder can take many forms but the type I’m really referring to is of a covertly narcissistic and/or sociopathic nature. It may be too difficult for some people to be able to comprehend but it does happen and I’ve seen it happen.

Narcissistic/Sociopathic (narcopathic) abuse takes place when a narcissist or sociopath (or narcopath) attempts to convince someone who has discovered their unbelievably shallow secrets, gradually over time, that they are crazy and proceeds to manipulate them into keeping quiet or to ultimately face their wrath. They use techniques such as crazy-making, character assassination and gaslighting in order to get their victim(s) to question their own sanity.

They generally do so by ostracizing the victim while continuing to act out their part, expertly hiding their truly outrageous behavior, whilst successfully having everyone around them fooled – everything is done to appease those around them while their manipulative and controlling tactics take place behind the scenes, outside of people’s awareness. The victim is forced to question their own sanity because they don’t realize that they are the victim because everything done to manipulate them is done outside of their conscious awareness.

The longer time goes on and the longer the victim tries to do something about it, the more severe the abuse becomes. The narcissist/sociopath has already built an army of unwitting abusers who all help to drive the victim crazy. The long-term consequences of these actions can be a devastating, soul crushing and reality-shattering path to be led down.

Of course, there are many other types of abuse that can have just as damaging and severe long-term consequences. However, psychological forms of abuse such as gaslighting, mental rape, slander, defamation and distortion campaigns of a person’s reputation are done so covertly and expertly that they are very rarely identified early enough.

The abuser, when carrying out these covert tasks, is faceless and undercover.

Victims of this type of abuse are commonly left with no resources they can use to escape the situation; the abuser has stolen their finances, their identity and has turned the victim’s own family and friends against them, due to the malicious web of lies and deceit that have been woven. The victim is trapped with no way out… or at least that is what they are made to believe. 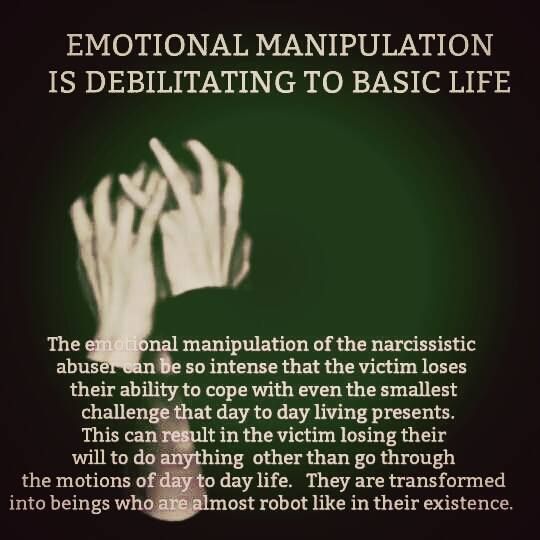 Although victims go through what can only be described as being dragged through hell backwards, narcissistic and sociopathic abuse via heightened communication is so difficult to pick up on the human radar of perception that the victim is usually left scratching their head wondering “is it me?”

They have been made to believe that they are the problem. Such abusers are so shallow that they may cheat on their partner on significant occasions such as valentine’s day or while they are away at a funeral – at times when the victim will least expect it.

Not only that, they will do it with the person the victim suspects the least…. time and time again. In many cases the victim may turn to drugs or alcohol as a means of escape. The stress they are forced to endure can be so severe that if they don’t find some kind of release in order to feel a sense of escape, they continue to build up with overwhelming tension, anxiety, emotional suffering and may develop an overactive mind which can literally drive them crazy – post traumatic stress disorder (PTSD) can soon follow.

That’s not to say that the drugs will either prevent it from happening or even slow the process down – they won’t. They will only exacerbate the situation in the long run.

The abuser never quits abusing and the victim’s self-esteem gets worn down to the core until they go through a process of devaluation, dehumanization and dissociation. The victim has been made to feel that they are nothing in this world, they now have nothing, they now have no meaning and nowhere to go and nobody wants them any more except for the narcissistic/sociopathic abuser who can now use the victim as their emotional/mental slave. The narcopath is now their God.

The process is so subliminal and it happens so gradually that it could take place over the course of ten or twenty or even thirty years or more. The victim knows that even if they did escape the situation the abuser would probably continue to ruin the rest of their life or future relationships anyway and in many cases after the partner has left, the abuser continues to drive them crazy gradually destroying their reputation, their life and their soul – often referred to as soul murder.

Eventually the victim may be left feeling suicidal but fear that others would see it as a selfish act. Additionally, they don’t want others to be left picking up the pieces they left behind because they do feel real true genuine empathy. For this reason many victims believe they have no choice but to continue suffering the abuse and may feel that the damage is already done.

Some victims may ultimately decide to continue to pump as much alcohol or drugs into their system as they can. This way they can use it not only as a form of escapism but also to slowly kill themselves so that they can reach the point that they have to suffer the abuse no longer. Others may not turn to substance abuse but may end up suffering fatal medical issues as a result of the abuse alone which may potentially lead to death a result of pernicious abuse.

Some may have given up on their hopes of escape and may have just accepted things the way they are (conditioned into co-dependence) but unless they are an inverted narcissist, then the stress will eventually take it’s toll. Stress is well known to cause a myriad of health problems, both mental and physical, many of which can be fatal.

Ultimately, the victim takes the knowledge of their covert psychological murder to the grave which forever remains a secret inside the mind of the abuser.