The narcissist has a seemingly inexhaustible obsession for making people who cross them “pay”. Once they set their sights on you, you’re a permanent enemy, and their seething spite will feel as intense years down the road as it did when it first began. The length of time they can keep up the full intensity of their hatred for you and their campaign to exact revenge is absolutely dumbfounding to non-narcissistic people.”

If you don’t know the true meaning of the term “narcissist,” consider yourself blessed. But in order to remain blessed, it’s imperative to learn about what the word “narcissist” encompasses – from afar of course.

In popular culture, the term “narcissist” is thrown about quite loosely, usually referring to someone scoring high on vanity and self-absorption. This reduces narcissism to a common quality that everyone possesses and downplays the symptoms demonstrated by people with the actual disorder.

While narcissism does exist on a spectrum, narcissism as a full-fledged personality disorder is quite different; many experts believe Narcissistic Personality Disorder (NPD) falls on a spectrum alongside Antisocial Personality Disorder, or in colloquial terms, psychopathy or sociopathy. Narcissism, as a full-fledged disorder, is one of the most intractable, destructive and worst conditions in the human existence.

Why are narcissists so dangerous? Every survivor describes narcissists in DANGEROUS terms. Each person that’s been victimized personally by a narcissist will warn you and serve as a cautionary tale that if you welcome a narcissist into your life, you’re dancing with the devil; welcoming them in to do one thing and one thing only to you: use, abuse and destroy you.

So… what is a narcissist?

Narcissists are people who suffer from Narcissistic Personality Disorder (NPD) and the signs and symptoms are so obvious once you can learn to identify them. But trying to understand Narcissism can almost drive you insane because it makes no sense. Because the sad tragedy of NPD is that those who suffer from it will never, ever realize that they have it.

In basic terms, NPD sufferers lack empathy for others and most importantly for themselves. They are furiously self-destructive while also maintaining an appearance of having it together. They maintain this appearance in a variety of ways: lying, cheating, stealing or victimizing others. This is not to say that narcissists are not nice people. They are very good at mimicking human emotions and behaviors but by and large they are psychopaths. If a company has a narcissist for an HR manager, that company is in danger. If your therapist is a narcissist, your mental health is at stake. If your mother is a narcissist, every person you try to marry will be an enemy. If a narcissist falls in love with you, then you become their number one enemy. God forbid you marry a narcissist because they will make your life (and your children’s lives) a living hell.

If you have something a narcissist wants be prepared. They may want to be friends with your friends. They may want your popularity. They will study you as if you were prey and they were a predator. They may even view you as a threat to something they already have. But once you’ve been chosen as a victim of a narcissist, your complete and total annihilation is what they have in mind. And if they can’t kill you, they will do what they can to smear your reputation or turn your friends, lovers, and supporters against you. They want to wipe you off the face of the Earth and if they can’t do that they will ruin everything in your life so that you’ll want to die. They are counting on you committing suicide.

And what makes narcissists so dangerous is that if you discover that they are a narcissist or even expose them as one they go in for the kill.

I repeat: and what makes narcissists so dangerous is that if you discover that they are a narcissist or even expose them as one they go in for the kill. Do not forget those words, whatever you do.

The excerpt above was written by Personality Disorder expert, Patrick John Coleman; in my opinion, it’s one of the best, brief and most accurate explanations I’ve read to date about this topic.

Being in a “relationship”  with a narcissist is a giant illusion, it’s nothing more than smoke and mirrors, a giant lie that’s custom-tailored to deceive you into thinking you’ve found the love of your life. What you’ve actually found is a master manipulator, con artist and thief who will soon rob you of all the love you have in your heart. But you won’t realize that for quite some time…

When you first meet your narcissistic lover, the romance seems “other-worldly.” The narcissist knows how to mirror your wants and needs, convincing you that he’s your soul mate. The romance starts off spectacular, with plans for a future together discussed early on, with immediate plans for the upcoming weeks filled to maximum capacity. it couldn’t be any better except… it’s all guaranteed to end in complete disaster and pain. Expect to be shocked, to feel violated, to feel betrayed, and be prepared to lose everything. When you’re with a narcissist, all you’ve been taught about life and humanity no longer applies. You’ve entered into a dance with the devil, a dance in which anything goes, and it’s a matter of time before you get burnt, it’s only a question of when you’ll have a  grand finale that’s guaranteed to never end in your favor. It’s guaranteed to end with paramount injustice and pain.

Adding more insult to injury, the narcissist seems to gets away with everything, whereas the victim loses so much, and is stuck with all the blame. The narcissist has matured the ability to “flip the script” on the victim, making him appear like the perpetrator, while the narcissist appears calm and collect. Narcissists provoke their victims in order to use their reactions against them,  making them appear “crazy” and unstable in front of others; the narcissist fails to mention that he’s the one that drove the victim mad with senseless abuse.

When most hear the word narcissist, they immediately equate it with vanity, they envision a person who’s fixated on their looks and in love with themselves; but that pre-conceived notion couldn’t be any further from the truth. Narcissists are definitely all about appearances, but it’s not so much the physical appearance as overall image and reputation. The narcissist actually hates his “true self” so he projects a “false self” to the world, which he defends at all costs.

The narcissist doesn’t live in reality, instead he creates his own delusional world in which he and everyone else only recognize his false self – the mask he shows the world. It’s all about  having the image of perfection, the appearance of having it all together, it’s all about pretending to be everything the narcissist is not. The hallmark traits of Narcissistic Personality Disorder (NPD) are lack of empathy, interpersonal exploitation, grandiosity, feelings of entitlement, and fantasies of unlimited power and success. If you dare cross a narcissist or address his true self, he’ll destroy you. The narcissist will ensure your image is maligned and portrayed in a false light for the world to see. Narcissists use lies and character assassination to discredit you among family, friends, your employer, even the police; they’ll ensure that no one believes you if you speak out about their abuse. This seems petty, juvenile and a complete waste of time, but like clockwork, this is how a narcissist reacts to fear of being expose time and again. Narcissists are notorious for holding grudges indefinitely, and they must get revenge; and without having a conscience, the tactics for revenge are ruthless.

Here’s the deal, sweetie. For several months or so, I’m going to pretend to be everything you ever wanted. I’ll shower you with attention, affection and all manner of stuff to make you feel special. Then, once I know you’re depending on me as your significant other, and have made a commitment, I’m going to quit pretending and be who I really am. I’m going to start treating you really badly. I’ll say insensitive things, I’ll lie, I’ll cheat, I’ll be really cruel, possibly humiliate you in public. Hey, I might even beat you. Your job will be to figure out what happened and do everything in your power to restore the relationship to what it was, until you either die, try to kill yourself, or collapse and get sent to the hospital, which will be pretty funny because there’s no chance whatsoever I’ll ever pretend to be that ‘nice guy’ again—and by the way, it WAS a pretense. So what do you say, sweetie? Do we have a deal? Several years of hell in exchange for a few months of fantasy.

Narcissists often present as kind, altruistic and generous, but they’re anything but… 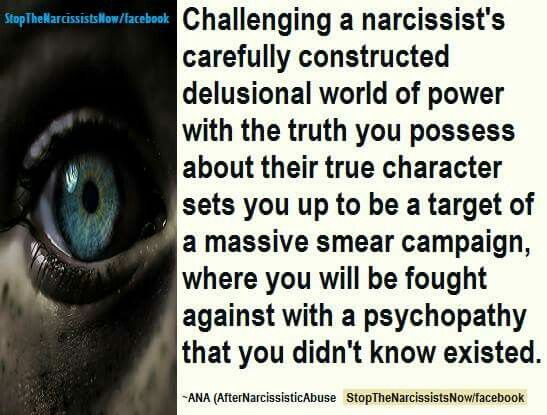 A narcissist cycles his victims through the same 3 phases of the narcissistic relationship: idealization, devaluation, and discard, only to often “hoover” them back up and do it all over again. When the narcissist declares the end has arrived, a nightmare smear campaign has already been going on behind the victim’s back for months, sometimes years, to ensure they’re financially, emotionally, and socially ostracized from any support; this is the narcissist’s way of murdering the victim without having to pull a trigger. Narcissists are extremely successful in pulling these smear campaigns off using abuse by proxy.

This is precisely what I’m experiencing. 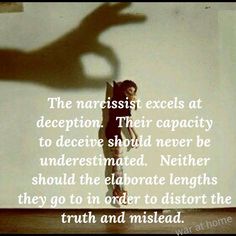 There’s a reason why a relationship with a narcissist is referred to as “psychological rape” or described as “being dragged through hell and back,” although these analogies may be understatements. As I’m about to show you, being involved with a narcissist is that bad; every time I think, “It can’t possibly get any worse,” it gets worse, exponentially.

Narcissists harbor a level of cruelty, vindictiveness, and deception like no one else. Since narcissists play off our pity and frequently don a beautiful “mask” of altruism, we become all the more confused and cognitive dissonance takes over. We doubt our own experiences and intuition and give more power to the narcissist’s world of delusions. I’ll be the first to admit it: I’m guilty of siding with the narcissist over Pinterest. I never will again.

A narcissist is an amazing actor but beneath the Oscar-caliber performance, herein lies a bully that stops at nothing to control, destroy and exact revenge on anyone perceived as a threat. Frequently this is the narcissist’s significant other or his children, those that come to know his true nature the best. It’s also common that his wrath is extended to any offender who attempts to establish healthy boundaries or act in a way that’s perceived as a criticism, slight or threat. Narcissistic abuse may be invisible, but it’s insidious and crippling, often resulting in irreparable damage to the body and mind. When dealing with a narcissist, one must accept that the “bad guy” won’t be held to justice, he’ll be on to his next victim, having completely forgotten you exist.

Narcissists don’t just attract potential partners as victims; they also attract a large, diverse support base – referred to as their “flying monkeys.” When narcissists fear exposure, they recruit their flying monkeys to attack the victim from all angles, taking the attention off the narcissist while destroying the victim’s reputation, destroying his finances and employment, and often sabotaging every facet of his life. They want to leave the victim with nothing, with their reputation completely ruined, all in the event that if he speaks out, he’s already lost all credibility.